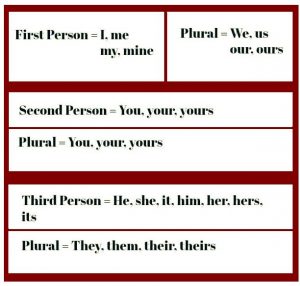 In each of these methods to telling a story or writing style, the personal pronouns are what usually separate them. In the grammatical world and term, the perspective of each person’s point of view is what helps define the story or message. It also sets the tone for how the story written or told.

In the first person point of view example, the singular form of “I” is mostly used. In addition, the writer or person telling the story will use pronouns such “me” or “we” as well. You can use either “We” or “I” in the subjective case to refer to others or yourself. For the most part, biographies tend to use the first person point of view to tell the story. Or when a person is writing a personal essay about his or herself, in his or her own words. Other pronouns also used are “Me”, or in the possessive case, “Mine”, “My” and “Our/Ours”.

So this is me writing in this article to explain to everyone how I write in the first person. I am telling my examples of a first person style so that we all can understand how our grammar rules work.

First person shooter games are great. I can get to kill all the bad guys and use my weapons in any way I want to.

We never really talked about how the divorced impacted her this year. Instead, we both focused on issues about us.

If you want to get your point across to explain something to someone, you use the second person as I am doing (first person) now in this lesson for everyone (second person). In a second person point of view writing or storytelling, the pronouns mostly used are “You”, “Your” and “Yours.” You can use any of these 3 pronouns so that you can address the audience.

This will allow you to cover one or several people in your story. The use of second person is primarily seen in technical writing – such as this – and in emails and messages. You can also see it for business presentations or when you are being told how exactly you should do something.

We have recently learned that the president of the company is coming by this week. Please try and be prepared and have your work area as cleaned and neat as possible. Also, avoid dawdling and appearing as though you are not working. The surprise visit may come when any of us least expect it.

The above example is a plural second person example.

A singular second person example are ones you would do when writing an email or letter to someone. Example:

I am really sorry you did not get the promotion you were so eagerly hoping for. Perhaps in the next cycle they will finally notice how much of an asset you are to us all.

Many people searching on how to really write in the third person correctly, often make some mistakes. In many cases, they will end up not following the examples given. Instead, they will choose to use their own.

When Julissa and Hector met for the first time, they had no idea what the future held for them. At first, she did not even like him at all. But over time, Hector began to win her heart by saying beautiful things to her. Now, they are inseparable and getting married next month.

Just remember when you want to use either 1st, 2nd and 3rd person point of view to tell your story, think of the audience and what you are trying to tell them. This will help you make the choice of exactly what the best point of view will be to reach them, tell your story and make your point.