↓ Skip to Main Content
Home › English › Apart vs A Part – Which One To Use?

Apart vs A Part – Which One To Use? 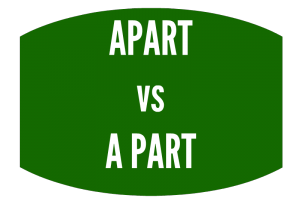 Especially for non-native speakers, the English language has some mean tricks up its sleeves. Many problems occur when words sound alike but are written differently. In written English, this causes quite some confusion, at times. When words are spelled almost identically, however, this gets even worse.

Today, we want to look at one such instance. This article will focus on a word pair that sounds alike, looks quite alike and is thus often confused. The pair in question is the one of apart and a part.

Apart vs A Part

When talking, those two words are almost indistinguishable. They sound so similar and if you don’t pay very close attention to your pronunciation, they may actually come out as the very same. However, the difference in meaning is quite striking, and thus it’s important to get them right when writing to or with someone.

Following, we will look at both in more detail. 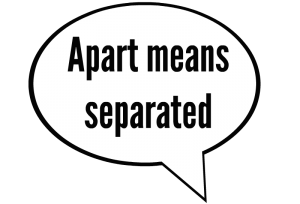 Apart is an adverb.

It means that two or more things or people are separated by a distance, whether that may be in time or space. Check out the following examples:

Apart can also be a preposition. In this case, it is paired with “from” to form the construction apart from.

The meaning of apart from is close to besides or with the exception of something. Consider the following examples: 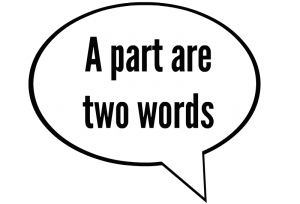 A part, on the other hand, consists of two words.

While a is just an article, part is a noun that means a piece of something or a segment of something bigger. Have a look at these examples:

In some instances, the article can also be dropped, namely when part is not preceded by an adjective. The first example sentence from above could thus look like this:

However, if there is an adjective further defining part, the article has to be used as the following examples show:

How To Remember The Difference

Apart from the difference in meaning, there are other ways on how to remember when to use apart and a part.