↓ Skip to Main Content
Home › English › Where Did The Term Nicknames Come From?

Where Did The Term Nicknames Come From? 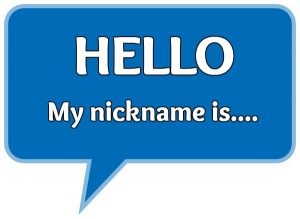 When people have an alternate name they are called by, most refer to those monikers as their ‘nicknames.’ But just where did this term come from? How did it come to be that when a person was called something other than their legal name, it came to be a nick name?

According to history, the term nickname has been in place dating back to the 14th century. When we look into the term, there are several interesting issues one can discover. For one, the literal definition for ‘eke name‘ means to have ‘an additional name.’

If we investigate the word ‘Eke’ even further, we come to see that it is an even much older word. In fact, the word eke dates back to the year 1200. The actual meaning for it is to ‘extend’ or ‘increase’ something. In addition to these meanings, eke also meant to ‘lengthen.’ That may explain how it came to be attributed to the nickname term later on. It is important to note that the phrase or meaning ‘eke out’ derived from this meaning.

The Origin Of The Nickname Term

One of the first instances where the ‘eke name’ was actually documented took place back in the year 1303. This happened in Middle English devotional Handlyng Synne. That was written by Robert Manning of Brunne. From there, the ‘ekename’ ultimately evolved to the term ‘nickname.’ Another term that the word nick name came from is the O.E. eaca, ‘ick‘ term. The reason for this is because ‘ick’ also means to “increase” or “extend” something.

In the end, nicknames have become more popular than ever now. It is a very common practice these days for people to have one. In many cases, people even go out of their way to either get a nick name or assign one to someone. Case in point is that there are even nickname generators you can find online now. In fact, if you use search engines, and you begin to type the phrase “What are nicknames,”  you automatically get the word ‘for‘ added to the search term.

That means you get ‘what are nicknames for……..’ such and such. You then also have many different real names come out as suggestions within the searches. This means that there are many people out there looking to find a nickname for themselves orr for someone else they know by a certain name.

Today, nicknames for just about everything we use abound. They are no longer limited to just people. You have nicknames for sports teams, movie stars, artists and all just about everything. There are even nick names for places and all kinds of things we use everyday. Chances are that if you are reading this, you have a nickname for you. And you may even have a nick name for this website or the article.