↓ Skip to Main Content
Home › English › What Are Colloquialisms?

Have you ever wondered what colloquialisms are? Most people have no idea what the word means even though they most likely use them everyday. In most instances, they vary from place to place and region to region. The colloquialisms you may be using today largely depend on where you live, whom you associate with and so on.

For such a long word, colloquialisms actually make things easier for those that use them. A colloquialism is phrase, slang, word or expression characteristic that people use when speaking to others. The difference is that colloquialisms are used in familiar conversations as opposed to formal speech or writing. A prime example would be a greeting between two real good friends. In formal greetings, one would say “Hello, how are you doing?” to greet someone. However, if you were using colloquialisms, you would instead say “What’s up?.” Other forms of colloquialisms would be someone saying you ‘wanna get outta here?’ to someone instead of ‘want to get out of here.?

Colloquialisms or informalities, are used everyday in our lives. With so many people using cellular phones to chat and text, colloquialisms have become more widely used. That is because they tend to get your message across much faster. Just like abbreviations, a colloquialism can cut down on the amount of words or phrases you may need to say what you want to someone.

Still, too many people often make the mistake of using them at the wrong time. They may be okay to use when speaking to someone whom you are familiar with. However, they should not and are not recommended whenever you are addressing someone who you are not formal with. Prime examples would be a person going on a job interview or speaking to colleagues in a formal business meeting.

A lot of writers use colloquialisms in literature to address their audience. Numerous writers trying to connect with their readers, may often need to sneak in colloquial expressions. These expressions are part of the language used by the people around them and in that particular society. It is much easier for a writer trying to reach a younger audience of readers to use slang or known phrases. Unlike formal writing, those slang words or colloquials can add a more real feel to the piece. Case in point would be the hard time most people who read Shakespeare have in understanding what he means. Of course his writings come from a different era altogether. Nevertheless, because he was so formal in his writings, the colloquials which he used bakc then are easily understood by today’s readers.  Case in point is one of the most famous love stories in history named ‘Romeo and Juliet’ which he wrote. It contains a few phrases such as “Anon, good nurse.” The word ‘Anon’ colloquially meant ‘later’.

Buzz off – go away 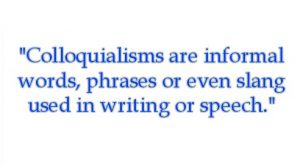 Outta Here – out of here

When Should You Use Them?

Colloquialisms are great since they help people express themselves easier and quicker. In addition, writers can better connect with their targeted audiences. For friends, family and strangers, colloquialisms can serve as icebreakers in conversations. Be that at as it may, the question one may be wondering is when should you use them?

Do not miss reading these Reasons Why Grammar and Spelling Matters

Whenever you are addressing someone whom you are comfortable and informal with, colloquialisms usage are acceptable. However, as stated earlier, when speaking or communicating with others in a formal setting, avoid using them at all cost. Keep your formal writings or speech as professional as possible. In the end, colloquialisms cut to the chase and help us get our message across.