↓ Skip to Main Content
Home › Grammar › Farther vs. Further – Which One To Use?

Farther vs. Further – Which One To Use? 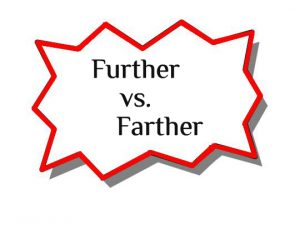 Have you ever wondered about the words ‘farther vs. further’ and which one to use? Chances are that like most of us, you have. They are just two of the many words in the English language that can be quite confusing. The majority of them sound, are almost spelled the same and often have the same meaning as well.

Since both of these words mean greater distance, are almost identical in pronunciation and writing, the confusion is easy to make. But the truth is that if you take a closer look at them, you will be able to tell them apart and use them properly when the time calls for choosing between farther versus further.

One of the best ways to remember the difference between further vs. farther is by using an easy to remember definition of each one. When it comes to further, just keep in mind that it refers to the figurative or metaphorical distance. Unlike ‘farther,’ the word further is to demonstrate the extent of how far apart a person or thing is from the other. Another tip to memorize is that further is often used when you are referring to something additional. An example would be “I have some further questions to ask you on the subject.” Or another example such as “If you want to increase your vocabulary further then don’t keep your dictionary that much farther away.”

You may also enjoy reading A While vs. Awhile – Which To Use?

The word farther is much more easy to remember using an easy definition. That’s because farther is and should be used to refer to actual physical distance between things. The best way is to think of the word ‘far’ in farther. When you need to distinguish between farther vs. further, remember the ‘far at the beginning’. That’s because ‘far’ is obviously in reference to physical and real distance.

Sometimes They Both Work

There are some rare cases where you can use either further or farther interchangeably in a sentence. The exception comes when you cannot really tell whether the person is referring to physical distance or not. While there are some really careful writers who will try to find the correct word each time, you don’t really have to. Even the Oxford English Dictionary and several other sources mention that it is okay to use them interchangeably at times. An example sentence where either could work would be:

“I just found out that you are further along in your pregnancy than me.”

If you think of the actual physical distance in time (months) when it refers to pregnancy, then using ‘farther’ would also be correct.

Some More Farther vs. Further Examples

Just in case you may still be a bit confused or unsure about further vs. farther and which one to use, here are some more examples.

If you go farther down the street, the parade should be visible.

Once he got up, he realized that he had fell farther than expected.

As we continued driving, the homes became farther apart from one another.

After she walked away, he realized that they were now farther apart

from each other than he expected.

Hey Dad, how much farther do we have to drive to get there?

Take a look at the Differences Between Where vs. Were, Wear And We’re

Your honor, I have no further questions for this witness!

Samantha took Robert’s hand and moved it further away from the fire.

The teacher felt he did not need to explain the lesson any further.

“Young lady, you are grounded until further notice!” said the angry father to his daughter.

The only reason you wanted me to stay here further was so that I would babysit for you.
After the bill was passed, congress gave no further explanation on the matter.