The Evolution of Books [Infographic]

With the rising popularity of the e-book in the 21st century, many speak of the evolution of books from it’s very earliest state to now. Critics and lover of the printed page already go a step further and speak about the extinction of the book in it’s “traditional” form that we all came to know.

Online-Spellcheck.com will not take a side in the ongoing e-book vs. printed book debate. Instead, we want to provide a little evolutionary overview of the book through the centuries.

However, please consider this article as a nice little overview instead of an exhaustive research on the matter. Instead of considering all forms in which the book appeared throughout the years, we will focus on major milestones that shaped the face of the book.

The very first notions of books come from the ancient Mesopotamia. Back in these days, almost all kinds of natural material could suffice as a canvas for drawings and writing: clay, bark, stone, wax, … Every rather robust and still imprint-able material sufficed for early writings. The usage of clay tablets is recorded especially throughout the Bronze and Iron Age.

However, the writing system back then did not consist of letters like we know today, but rather comprised of symbols.

The usage of wax tablets introduced a new feature: the recycling of written notes. These writing materials that were used, e.g., in schools could be melted and formed into a new, blank tablet.

Tablets of all kinds of material, especially made of clay, were used up until the 19th century — despite the introduction of paper and printing.

Papyrus and parchment were the predecessors of the material we, up to recently, consider the main canvas of the book: paper. Papyrus, a plant common for the Nile region, was a popular material for writers in Ancient Egypt. Glued together, these sheets of papyrus formed a scroll.

Throughout the Chinese, Hebrew, Hellenistic, Macedonian and Roman cultures, the scroll was the most dominant form of book. In Asia, scrolls were used for a longer period than in the Roman world.

With the fall of the Roman Empire, the usage of papyrus declined as well, most probably due to lack of contact to Egypt. Parchment replaced the usage of papyrus. It was fabricated using the skins of various animals. While it proved to be longer lasting as the papyrus scroll, it was a rather expensive material due to the costs of manufacturing.

The first instances of papermaking are reported from 105 AD, however, the material was rather used for wrapping and padding at that time. It’s usage as writing material spread throughout the 3rd century. Next to writing, paper was gradually introduced into many parts of life; as toilet paper, tea bags, and as a currency.

The introduction of paper mills in the 11th century benefited the spread of paper all across medieval Europe. Due to the simplicity of manufacturing new paper, it soon became a much cheaper and thus more popular material than parchment.

Despite paper providing an easy mean to get your hands on writing material, the creation of documents and books remained a hassle. Reproduction of the bible and copies of law papers had to be made by hand. Naturally, that took a lot of time and could only be done by those that were capable of writing.

All of this changed with the introduction of the print mechanism.

The earliest accounts of printing date back as far as 220 AD where woodblock printing was used to copy writing in ancient China. By using differently carved blocks of wood, even color printing was possible.

During the 11th to 13th century, printing using movable type was introduced in Asian countries and Egypt. Thanks to this new mechanism, the tiles used for printing could be re-used. The first movable type book press was invented around 1440 by the German goldsmith Johannes Gutenberg.

The spread of papers, pamphlets, and books increased vastly with the invention book presses and printing machines using movable types. Now, books didn’t have to be copied by hand anymore, and several copies of the same writing (most prominently: the Gutenberg Bible) could be produced at the same time.

The Book As We Know It

In 1501 AD, the very first form of pocket book was printed by an Italian humanist who sought to preserve the rich literature from Greece. Aldus Manutius’ goal was to enable the broad public to own a pocket-sized copy of these classics, and for it to be carried around easily.

Afterwards, the pocket book format gained more and more popularity. A growth in education and thus in the number of people capable of reading and writing fostered this development, initiating the production of the written word for a mass market.

Here are some key dates and milestones in the development of the book as we know it today:

In the 1980’s, the very first digital copy of a book appeared. Up to then, the only non-physical copies of books were used for the printing process only. The first book distributed on CD in a plain text form was a version of the Academic American Encyclopedia.

Since then, many more books have been published and distributed using the CD as a medium. The most prominent usage is, by far, the audio book. Previously published on cassettes, audio books gained more and more popularity with the distribution of CDs.

The Start Of The E-Book Era

The new Millennium marked the beginning of the e-book market. Even though the first ever e-book has been published in the 1970’s already, the 21st century established the electronic version of the book as a popular publishing format.

Just like any novelty, the e-book struggled to be accepted by publishers and authors alike. With the release of the Amazon Kindle in 2007, the way for the e-book into everyone’s pocket was paved. Gradually, the e-reading devices became better and better, and more affordable and thus attractive for a broader audience.

Where Will The Journey Lead?

This question is a matter of speculation.

Even though the e-book gained popularity over the past year, the extinction of the paper-copy book still seems to be a fear for the far away future.

But what will the next step be?

The evolution of the book seemed to have reached a level that can hardly be surpassed anymore. However, if you’d have the chance to ask Gutenberg, I am sure he wouldn’t have expected that people would be able to purchase books at any time, store them in a big number on a small device, and carry them around almost everywhere. 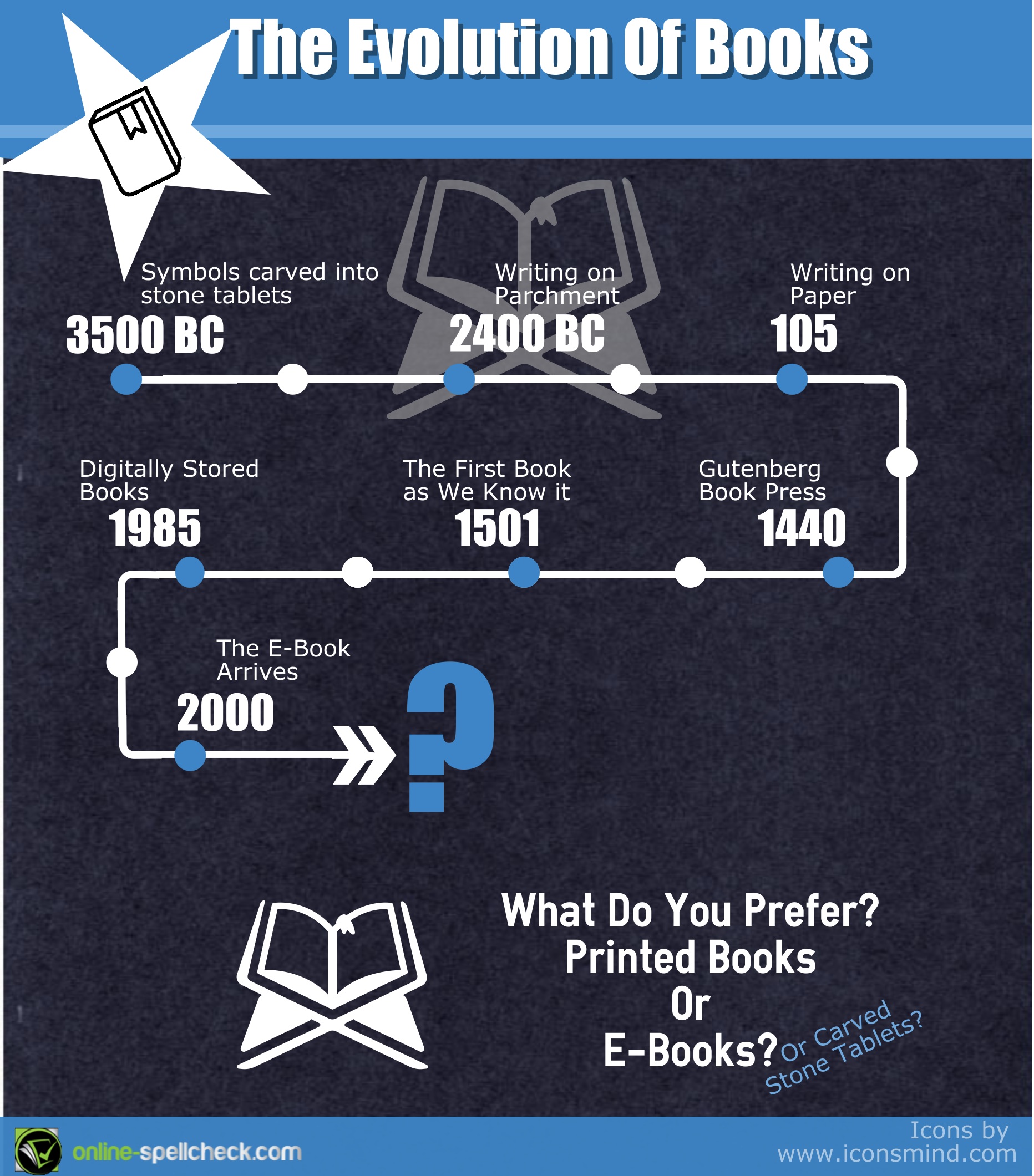