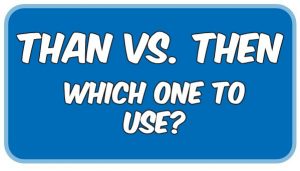 The English language has never ending amount of words called ‘trap words.’ These are words which are very confusing to use since they are almost spelled the same and sound alike. The words than and then are two prime examples. This guide on than vs. then and which one to use offers some useful hints.

There is a word for words that sound alike. Words such as these are called  Homophones. They are a type of what are known as Homonyms. You can check out the entire breakdown on homonyms, homophones and homographs here for further clarification on these words.

In most cases of words that are homophones or homonyms, they cause problems for people. That’s because they usually have only one letter that separates both words. Such is the case of then and than. Since these two sound almost the same and are almost spelled the same way, they are difficult to tell apart. They are known to cause headaches for many students, writers and people all over who use the English language. This guide will cover the differences between them both. In addition, there are also some tricks to help you tell them apart easier.

Here are some tips to consider when having problems between than vs. then.

The word ‘then’ is mostly an adverb that often refers to situations or actions in time. An example would be when you eat something and then brush your teeth afterwards. Or when you turn off the lights and then go to sleep. Then can also be used as an adjective such as at that time. Example would be “Back then, my mother made us clean our rooms each day!”

Part of the problems then causes for users is that it has a number of different functions. But, the best way to tell the word then apart, is by remembering it has to mostly do with situations referring to time.

Examples of Then in a sentence:

I never understood why she said she loved me, then said she hated me later.

The President back then would have never allowed that law to go into effect.

Stores in the mall have great specials now and then.

First I eat breakfast, then I brush my teeth.

We all bought some sandwiches, then something to drink.

Than is a conjunction which is mostly used as a way to compare things. You can use than to compare things such as objects, people, elements and so on. The best way to know when to use than vs. then is by keeping in mind this tip. Than does not have a one-word synonym. That means it is an original or one of a kind word. The best way to make this point is by trying to replace than in an example sentence. If we look at “Her car is better than yours!” sentence and try to replace than, you cannot. On the other hand, then has a bunch of synonyms with which it can be replaced easily in a sentence.

“So you agree then, that her car is better than yours?”

We can take the word then here and replace it easily with “So you ultimately agree that her car, is better than yours?”

Examples of Than in a sentence:

It is better to be safe than sorry!

I took her home, rather than let her walk alone.

No one knows better than me.

He has far more money than I do.

Always remember that than is mostly used after adjectives and adverbs to express diversity or choices. Then is primarily used to refer to actions in time.