It’s vs. Its – Grammar Rule Explained

There are two 3 letter words which constantly cause problems for people when writing. The words in questions are ‘its’ and ‘it’s’ both of which are eerily similar. They not only sound the same, but are only separated by an apostrophe. To make matters worse, the word ‘its’ is one of the top 100 words which is most frequently used in the English language. In reality, the English language contains many confusing, similarly spelled and pronounced words. To help those who may have issues with these two words, the it’s vs. its grammar rule is explained in the following guide.

One of the best ways to separate these two similar words is by knowing and understanding their differences. The word it’s is a contraction of the word it is, while its is the possessive form of it. That in itself helps makes it even more confusing. This is because many possessive forms contain an apostrophe. (example – Hector’s dog). However, the possessive its is actually a pronoun. And just like other possessive pronouns such as – yours, theirs, his and hers – they are written without any punctuation at all.

Example – The mechanic needs to fix my car. Its back wheel just fell off.

Here are Six Important Grammar Rules You Need To Know

The Easy It’s vs. Its Test

In order to help you try to remember which of the two words to use, there are several different ways to do so. For one, whenever you have to use the word it’s, remember that it is simply a contraction of the two words it and is. The same rules that applies to she’s – she is – what’s – what is – and how’s – how is, applies to it’s – it is.

Whenever you are in doubt about which of the two to use, simply try using – it is – in the sentence.

Example – I am voting this election. It is very important to do so.

Example – I am voting this election. It’s very important to do so. 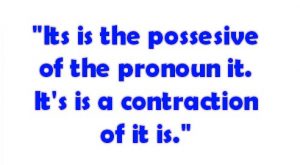 As you can see, either one of the two sentences is correct. However, if you try using just ‘its’ then the sentence would be incorrect.

I am voting this election. Its very important to do so.

In the same way, this can work to help you figure out when or when not to use its.

Example – That meal from yesterday was delicious. Reheating it did not cause it to lose its taste.

Now in this sentence, if you take the word its and try to use – it is – instead, the sentence would be incorrect.

Example – The meal from yesterday was delicious. Reheating it did not cause it to it is taste.

America is famous for its film industry and music.

America is famous for it is film industry and music.

Looking at both of the sentences, the bottom one is completely wrong and does not make sense.

One Final Rule To Remember

One final rule to keep in mind when it comes to these two words is the following – its’ – is always wrong. You should never follow the s with an apostrophe. This is actually one of those few times when you could say never for an English grammar rule. One of the best things about that is that it does not happen very often.

Don’t miss reading about How To Use Apostrophes Correctly

Although its and it’s are almost identical, when you break them down, you can actually see which one you should use instead of the other. Always keep the it is trick in mind whenever you find yourself unsure as to which to use. It’s a very helpful rule when its true form is known.