↓ Skip to Main Content
Home › English › Catsup or Ketchup – Which Should You Use?

Catsup or Ketchup – Which Should You Use? 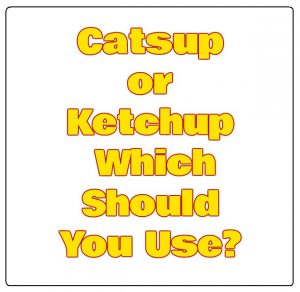 When it comes to the words Ketchup or Catsup, people often wonder which one they should use. They also consider what the difference between them both are. Plus, why one is spelled differently from the other? The truth is that catsup and ketchup are a way to say the same thing, but with different spellings. Interestingly enough, some people say that ketchup taste differently than catsup. Or that they each may have different ingredients. But is that factually true?

Most of us use ketchup or catsup on meals we eat each day. The French dry condiment is a favorite and widely used worldwide. Either way, European traders were first introduced to a Westernized, modern version of the condiment. This happened when they were visiting the Far East during the late 17th century.

The Origin of The Words

In the southern coastal Fujian region of China, they referred to ketchup as ‘ke-chiap’ or ‘kicap.’ The tasty condiment was used back then to add flavor to meals. It was made from herbs, spices, shellfish or pickled fish, as well as other ingredients. Once the Europeans tried it, they instantly loved it. They decided to bring it back home around 1690. It was back then that they called it catsup.

You may also want to read about Farther vs. Further – Which One To Use?

Around 1711, the early Western versions of the tasty condiment began to be called Ketchup. Most people are surprised to know that tomatoes were not used in ketchup until almost a century later. In 1801, an American cook was credited with being the one who added tomatoes to ketchup. That was the year he published a book. In that book, there was a recipe where the ketchup contained tomatoes. In no time, the version of ketchup with tomatoes inside became very popular in the US.

In 1837, a company called H.J. Heinz began to produce and distribute ketchup on a national scale. At first, Heinz called the tomato-based condiment catsup. However, in the 1880s, Heinz switched to the word Ketchup. Soon after, that version of the condiment became more popular and used among consumers and the industry. Today, anyone who uses ketchup knows the name Heinz.

Once Heinz began to mass produce their version which included tomatoes, things changed. As Heinz began to corner the catsup market, they decided to change the name to ketchup in order to stand out from the rest. Also, they wanted to show that their version contained tomatoes, unlike others. In a way, Heinz played a great role in the diminished use of catsup these days. While you can still use catsup – and some do – most of us use the word ketchup, instead.

Need help on Principle vs. Principal – Which To Use? then read on

For those that want to be grammatically correct when writing, the word catsup is the way to go. But, you should avoid doing so unless you want to refer to a company’s product. In fact, some spell checking programs will highlight ‘catsup’ as spelled incorrectly. Instead, they use the ‘catchup’ version of the word. There are a few around the world who use catsup. But, in the end, ketchup won over catsup and it is the more popular and recognized of the two words.