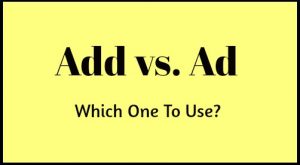 In the long list of words from the English language which can cause confusion when using them, we find add vs. ad among them. These two words are almost identical in spelling and are virtually pronounced the same. Because of that, it can become very difficult to determine which one of them to use properly at times.

The two confusing words – add vs. ad and which one to use? are a question that needs an answer. To make matters worse, there is also the word ADD, which is known as a medical condition. Although it is now considered an outdated term, ADD is still used. ADD is an abbreviation for Attention Deficit Disorder. Just keep in mind that when this is used, the entire word will – and should be – written in capital letters. That signifies an abbreviation or acronym.

Below, we will go over the differences between them both. In addition, there are a few helpful tips to make sure you can tell them apart easier.

You may also be interested in reading A While vs. Awhile – Which To Use?

One of the first things we must go over is the definition of the word add. The word add means to join or unite. Doing so will result in increasing either the size, quantity or number. It will also increase the importance of the sum. Add also means inclusion. Keep in mind that add is a verb.

Examples of using Add in a sentence properly.

Maria was asked by the teacher to add the sum of the fraction on the board.

I will add you to my list of contacts.

So remember that when it comes to either adding numbers or quantities, you use add. Also, when you want to add extra things, you also use add.

The best way to remember ad is to think of it as a commercial. That’s because ad is actually short for advertising. Unlike add which is a verb, ad is a noun. It was not until the year 1841 that the word ‘ad’ was actually used to define advertisement. Remember that  it is okay to use ad when referring to a commercial. However, if you are writing formally, it is better to spell out the entire advertisement word.

Examples of using Ad in a sentence properly.

My friends and I were blown away by the new ad from the Xbox One game.

The political ad was really negative and kind of turned many voters off.

Everytime I see that ad on TV I start to dance and laugh.

Don’t forget to read Principle vs. Principal – Which To Use?

Even though it can be confusing deciding which to use between add vs. ad, should be easier with these tip. That should really help you tell them apart. Just keep in mind that ‘ad’ is equal to a commercial since it is short for advertisement. For add, try remembering that it means additionally. Every Time you think of addition, focus on the first three letters which are ‘add.’