↓ Skip to Main Content
Home › English › The Difference Between Burned vs. Burnt

The Difference Between Burned vs. Burnt

The English language has many words that can be confusing or cause problems for people. Words which usually sound the same or are spelled the same, fall in this category. Those words are called homonyms, homophones and homographs. Luckily, there are some tips to help you differentiate between the two. Two of those words which fall in this category are ‘Burned’ and ‘Burnt.’  But what is the difference between the both of them and which one should you use?

Location Can Be The Reason

In a way, which word you use between burnt vs. burned often depends on your location. For the most part, people living in Australia, Britain or Ireland, tend to use either words interchangeably. To them, they are both the same word. However, writers and the general population in America, generally wind up using ‘burned’ in place of ‘burnt.’ This is because to them, they have different meanings. 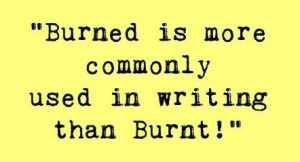 I was so shocked to see the entire forest burnt to the ground.

No one wanted to eat the burnt turkey meat.

Is there a reason why the house burnt down?

Although the use of the word burnt in all 3 sentences are correct, these would probably be used if the writer or person were outside of the USA or Canada.

When it comes to American English, the word “Burnt” is considered an adjective. It refers to something that has been burned in the past, or in past tense. At the same time, the word “Burned” is a verb and refers to an act of something burning in the past as well. While they both work and can be used as past principle or past tense of the word ‘burn,’ there are differences in usage.

You may also want to read about The Difference Between Homonyms, Homophones And Homographs

The English language is still evolving in many ways. The word burned is an older form of English. On the other hand, the word ‘burnt’ did not come into use until the 16th century period. As time went by, the British favored the newer version of the word. Those in North America however, went back to the traditional form of the word ie; burned. While burnt is primarily used outside of North America, burned is more common worldwide.

From what we can gather, it is then clear that the use of the words, depends on where you are from or living.

A person in Great Britain may say: 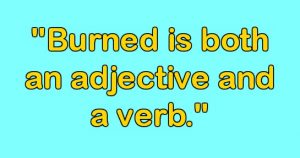 My sister burnt the toast.

My sister burned the sliced bread.

Interestingly enough, those in America would most likely settle on the second sentence. As we covered above, the reason for this is because those in North America consider the word burnt, when used as a verb, outdated English.

Here’s another article you may find useful – Principle vs. Principal – Which To Use?

There is one easy way for those who may be confused about which of the two words to use and when. Since both burnt or burned can be used as either an adjective or a verb in the past tense, they are both correct. To help you remember which of the two to use, simply think of the letter “T” in burnt. That same “T” which is also found in Britain, is the key. Associate “Burnt” with “Britain” as doing this will help you remember. When you do so, keep in mind that burnt, is more common if used in the British English and less if you are in North America.