Why The Ampersand Was Removed From The Alphabet 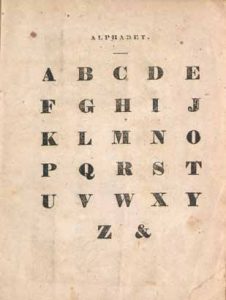 We all know that there are 26 letters in the alphabet. However, there was a time when there were 27 characters in all. But just what what was this mysterious 27th character? There are many people who are not aware of this. But the fact is that the ampersand was once listed together with the alphabet. So why was the ampersand removed from the alphabet? When was it done and how? The answers to these question prove to be quite interesting and educational.

One question a few often ask is ‘What character was removed from the alphabet?” Known as the 27th, the ampersand was that infamous 27th character. Although it is widely used today mostly by businesses on their names, it is still very popular. The ampersand is a symbol which is considered a corruption of the phrase “per se & and.” It dates back more than 1,500 years.

During the early 1,800’s it became part of the English alphabet. In fact, whenever children in school recited the alphabet, the ampersand was included. But instead of saying “and” or “&,” the would simple say “Per se.”  Interestingly enough, there are also three other letters in the alphabet that were treated like the ampersand. They are “A, I and O.” Back then, whenever people recited the alphabet, they would use ‘and per se’ each time they recited “A, I and O” as well.

The Creation of The Ampersand

The creation or development of the ampersand came about because of the Romans. Back then, the Romans would once in a while combine the letters “E” and “T. when they writing” The symbol they used was similar to one that represented the word “et.” The word “et” actually meant “and.” Over time, the development of the word ‘et’ continued to evolve until it finally ended up becoming the “&” character. It was still included in the Old English until it was finally replaced in favor of the Modern English.

Like creating words? Then check out How To Get Your Made Up Word In The Dictionary

Today, while we no longer consider the ampersand part of the alphabet, it is widely used. The truth is that when it comes to English & grammar, the ampersand comes very in handy.